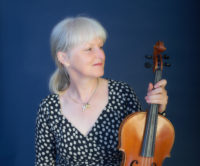 Barbara Maurer studied the viola at the Hochschule für Musik in Freiburg with Prof. Ulrich Koch and later with David Takeno in London. She has been concertising over the whole world, performing contemporary music as a chamber musician and a soloist.

She was awarded the Kranichsteiner Prize in 1986.

From 1989 until 2017 she was a member of the „Ensemble Recherche“ and as such has performed premieres of more than 50 solo pieces for the viola and over 500 hundred chamber music works.

She has been teaching at the Darmstädter Ferienkursen since 1998.

She has also been active in conveying music and especially modern music to school classes in the series „HörMal“ from 207 until 2015.

She also works as a translator for music- and filosophical publications from Italian, French and English. She writes and gives speeches about the role of the interpreter.

From 2009 until 2017 she was teaching modern chamber music at the Hochschule für Musik und Tanz in Cologne. In 2014 she published her book „Saitenweise“, a very succesfull publication on new sound phenoms and their writing for string instruments.

Since 2017 Barbara Maurer is Professor for contemporary music at the Folkwang University of the Arts .