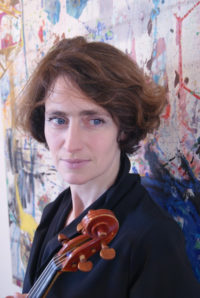 Geneviève Strosser studied with Claude Ducrocq in Strasbourg, Serge Collot and Jean Sulem in Paris, and had lessons with Yuri Bashmet, Franco Donatoni and György Kurtág. She gave solo performances with e.g. Gewandhausorchester Leipzig and the BBC National Orchestra of Wales. She can be regularly heard at the Festwochen in Salzburg and Berlin, Ars Musica and Wien Modern.

Strosser has a strong affinity with contemporary music. She was a member of the Ensemble Intercontemporain, Klangforum Wien and Contrechamps. Composers such as Stefano Gervasoni and Hugues Dufourt dedicated solo concerti to her. In 2011 she released a CD with solo works by Holliger, Ligeti, Donatoni, Lachenmann and Scelsi. She furthermore teaches string quartets at the Trinity College of Music in London and viola at the Musikhochschule Basel.