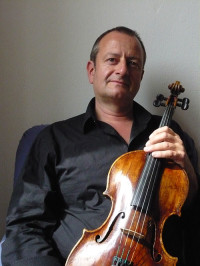 Werner Dickel, 1959, was born in Offenbach. He started his studies at the Musikhochschule Koeln, first with Gerhard Peters and finally with Rainer Moog and the Amadeus Quartet. After his diploma he went on to study with Nobuko Imai in Utrecht, Netherlands and later with Sandor Vegh in Salzburg. There he was the solo-violist of the famous Camerata Academica from 1984-86, led by Sandor Vegh.

After that he was a member of the Chamber Orchestra of Europe until he finally, for many years to come, was one of the principal
violists in the Ensemble Modern, one of the leading groups in contemporary music in the world.
With the Ensemble Modern he frequently performed as a soloist under such conductors as:Heinz Holliger,Hans Zender, Markus Stenz, Peter Eoetvoes and Pierre Boulez.

His regular chambermuisc partners include: Nina Tichman,Christoph Richter,Ulrike Anima-Mathé and Ib Hausmann.
Since 1995 he is a professor for Viola and chamber music at the Hochschule fuer Tanz und Musik Koeln at the Wuppertal branch.
He also conducts and still performs frequently as a chamber musician and viola soloist.

Since 1999 he is the artistic director of “Musik auf dem Cronenberg”.